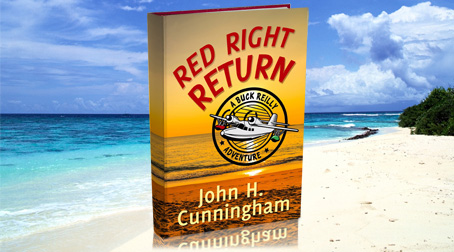 Cunningham’s winning debut, a modern-day thriller with a Key West hero, will make readers welcome the prospect of additional Buck Reilly adventures. Reilly has come down in the world since the failure of e-Antiquity, his Internet auction site; instead of gracing the cover of the Wall Street Journal, he now struggles to run his new business, Last Resort Charter and Salvage. His relatively sedate life is unexpectedly upended after he gets $500 to deliver an attractive woman to a ship at sea. He’s then hired to locate three missing members of a church delegation en route to Cuba, who were lost at sea in a storm earlier that day. The writing is crisp and punchy, making this suitable for a one-sitting read. Cunningham flavors the pot with stolen treasure maps, Santeria, and run-ins with the FBI. The satisfying ending demonstrates that Cunningham knows how to keep track of all the balls he’s thrown in the air.—Publishers Weekly