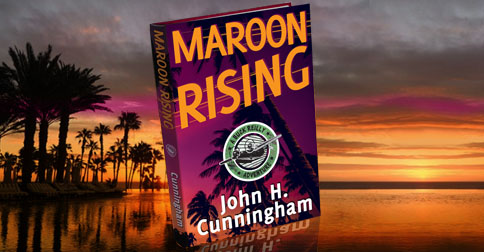 In the latest installment of Cunningham’s (Second Chance Gold, 2014, etc.) adventure series, Buck Reilly dodges bullets and faces off against kidnappers while searching for Jamaican treasure.

Buck lost a bid for a Port Royal salvage site in Jamaica, but his ex–business partner, Jack Dodson, won it. Jack’s subsequent search for treasure there, hidden centuries ago by former Jamaican lieutenant governor and privateer Henry Morgan, has proven fruitless. That’s because the treasure is in a different place, according to Col. Stanley Grandy—a leader of a group called the Maroons, whose original members escaped slavery in the 1600s. Grandy and archaeology professor Nanny Adou want Buck to find the treasure with the help of Morgan’s documents, including his diary. Buck agrees and soon falls for Nanny, despite the fact that she’s quite possibly withholding information from him. Circumstances quickly turn dire when someone abducts Nanny and threatens to kill her unless Buck tracks down the treasure within 48 hours. This novel is a jaunty romp with a protagonist who willingly acknowledges his flaws and failures. For example, Buck can’t stop thinking about Heather, his ex-wife who’s now involved with Jack—and has been ever since she and Buck were married. (Betty, Buck’s old plane, is also with Jack now.) There are numerous allusions to James Bond; after all, the protagonist is staying at GoldenEye Resort, Ian Fleming’s old home-turned-resort. But even if Buck considers Nanny his “Bond girl,” he’s not a spy at all but rather an intuitive treasure hunter, and he makes deciphering petroglyphs seem effortless. His hunt, too, is noble: the once-rich Buck, living like a pauper since filing bankruptcy, consents to receiving a mere 10 percent of the treasure haul so that the bulk of Morgan’s assets can go to the Jamaican people. Notwithstanding its ebullience, the story has its share of tense moments, from Nanny’s sudden kidnapping to a shocking double-cross. There’s also a perpetual sense of danger, and every unfortunate encounter with Jack’s trigger-happy partner, Gunner, is unnerving.